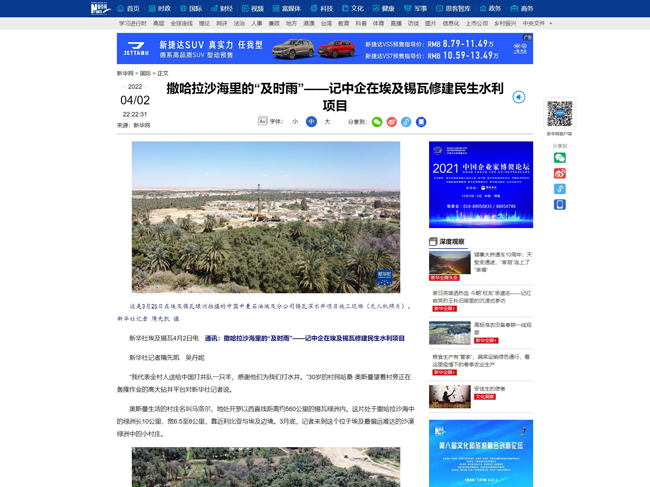 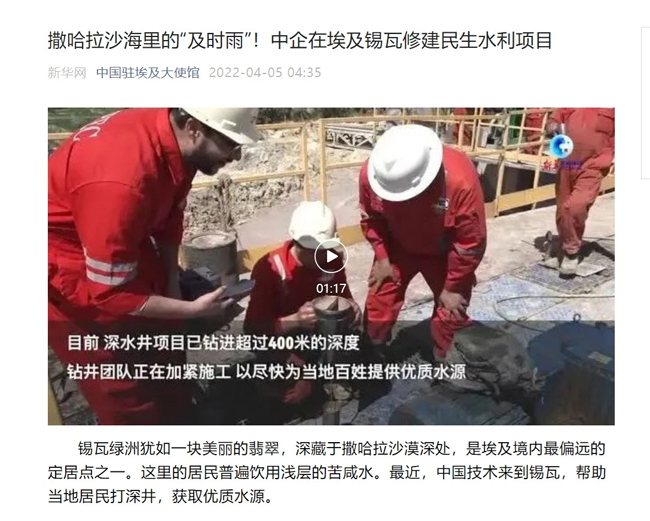 Recently, Zhongman Egypt Company's water conservancy projects in the Siwa area of the Sahara Desert have been widely reported by Xinhua News Agency, People's Network, CCTV International, Guangming Network, and other media, including the Chinese Embassy in Egypt. Providing high-quality water sources and improving the local people's livelihoods has further enhanced the influence of the Zhongman brand.

Local people praised the arrival of the Zhongman drilling team as a long-awaited "timely rain" in the Sahara Sea of Sand, actively practicing the national "Belt and Road" strategy for helping local people live a better lives while actively practicing their own national "Belt and Road" strategy. The Xinhua news agency's article was titled: "'Timely Rain' in the Sahara Sea of Sand - Remembering the Construction of People's Livelihood Water Conservancy Project by Chinese Enterprises in Siwa, Egypt", which tells the story of the Zhongman Drilling Team's solution  to solve the problem of urgent need for high-quality water for the people in remote villages in the local desert. lncluded were leading local employees to overcome difficulties such as long-distance treks and strata leakage in drilling, and improving people's livelihood by giving full play to technical advantages to carry out deep well drilling. The Guangming Daily reported on the positive actions of Chinese enterprises. Supporting Egypt's efforts to solve its top priorities and overcome difficulties, it reported on the launch of the deep-water well project and the service of agricultural production by Zhongman Egypt. At the same time, the CCTV International Arabic Channel also reported on the well project in the form of television news.